Wattle I Do Today?

'...as if angels had flown right down out of the softest gold regions of heaven...' - D.H. Lawrence, Kangaroo

Out walking with my dog in the reserve this afternoon I was thinking about the Australian landscape and its relationship to artistic endeavours like painting and writing. 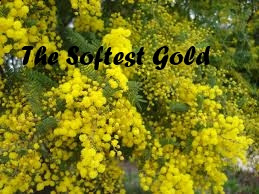 Picturesque paintings assumed a similar importance to current day holiday snapshots because they sought to capture a moment for later reminiscence, or to display an image of the landscape to those who had stayed at home.

In the twenty-first century, writing remains an active enterprise. As a writer, my imagination will transform the hills and valleys, the granite outcrops, the magpies celebrating the first hint of spring, into a story or two.

Sitting down to explore the landscape of my writing journey this afternoon, I recall that everywhere I looked the wattle was in bloom.
Posted by Chris at 14:40